Travelling the North of Vietnam by motorbike is a big deal. It’s a very cool thing to do. Talk to any backpacker, traveller or vagabond worth their salt and they’ll tell you it’s the way to see the North of this beautiful country. The only way, even. Understandably then, when I set out from Mountain View Hostel with my fully laden touring bicycle, eyebrows were raised.

Well, mine at least. It was 5 am on a Tuesday morning and it was all I could do to keep the old peepers open; staring wide / wild eyed, out across the glorious mountainside view from the comfort of the breakfast table, eyebrows raised; like Deidre Barlow used to do when Ken suggested they pop down the Rovers for a pint. The next leg of my journey around the world by bike would take in some breathtaking scenery, vertiginous climbs and a small number of incredibly well dressed tribes women. All within a stones throw of the Viet – Chinese border.

The return to Lao Cai was a gift. 35km of freewheeling down towards the border city, an easy start to a sleepy Tuesday. However this was not without incident. There were a couple of hairraising moments; the first when an early morning delivery truck veered to the far right hand side on a blind bend leaving little more than a breath and a prayer to glide by on. It was very close indeed. Later, enjoying the descent more than is wise, I left the brakes to the very last on a tight corner only to find that under the weight of the luggage and rider braking distances had somewhat increased. I managed to just scrape round and out of the path of a huge fourwheel drive. Another lucky escape.

My first stop on this tour of North Vietnam was Pho Rang, a tidy 119km South East, along one of the finest stretches of Tarmac since leaving Hanoi. It was sheer joy to push the bike along at 25km on the flat. It felt very quick indeed compared with the bumpy track north. The road wound tight with the course of the river, undulating gently as the earth dictates, flowing smoothly towards my target town. I stopped just outside Lao Cai for a brace of coconuts; a bargain at a dollar the pair; there’s nothing quite so refreshing as a coconut. I continued, doubly refreshed, to the next as yet unknown to me dot on the map. 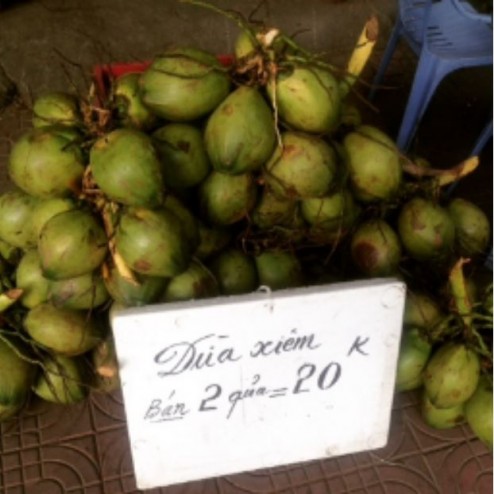 The intention was for Donna and I to meet at Ha Giang, about 350km North East of Sa Pa, after Donna has completed a quick visit to Mai Chou to write an article for her blog. It would take me three days to reach our meeting place. We would then travel together across the most northerly route available to Ban Gioc Waterfall, finishing in Lang Son three weeks later.

It was with some surprise that having crossed the most appalling road yet, that I arrived in Viet Quang, before Donna and her shiny new motorbike. The road literally ended as I crossed from Lao Cai district into Ha Giang, becoming a potholed gravel track almost immediately at the border signpost. This was all the more frustrating since I had just reached the summit of a 12km climb. It also started to rain. A rapid, mile munching downhill was out of the question. A friendly minibus driver, waiting for his passengers to take photographs, kindly informed me that this road would be rough and ready for the next 35km. I was gutted. 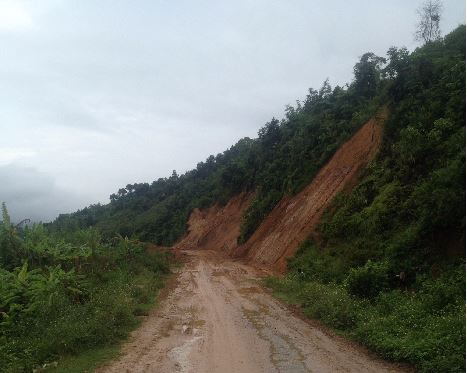 I picked my way through the broken surface of the road, slowly and surely, the brake pads squealing on the Aluminium rim in the rain, through orange red mud baths a foot deep, sliding from one edge of the road to the other to seek out the best line, fighting to keep the bike upright. Eventually this struggle gave way to a more forgiving strip of hard standing and then suddenly, a road. It was noon so I kept an eye out for a lunch spot, passing one in the rush to progress on this newly found speedway, stopping a half mile further on at possibly the busiest roadside cafe I’ve ever seen. I clambered through the dozens of Honda Wave and Yamaha Sirius semi automatic scooters into a packed eating house. 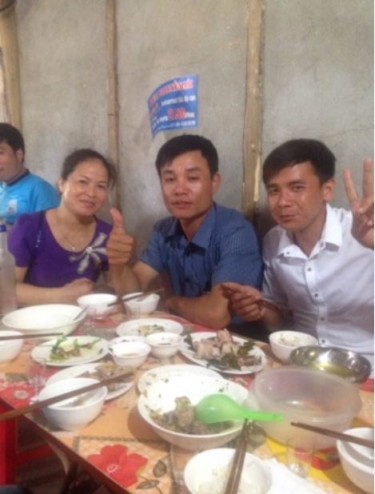 I was largely ignored by the busy staff until a table waved me over to join them. Rice wine was poured, hands were shaken, questions were asked; “Where you from? How old you? You like Vietnam?” More rice wine was proferred, I settled in. Dish upon dish was served. It was delicious. My new friends encouraged me to eat well. I indulged them. I down more rice wine. More hands were shaken. Men approached the table to share a toast with the stranger. Another bottle was brought over. Dishes kept coming. It was a frenzy of food and drink. I loved it. My hosts retired to smoke and take green tea, I followed, declining further invitations to eat at other tables. I was jubilant from this chance lunch and the return of the road. I’d relaxed into it and felt tipsy from the wine. I got back on the bike with a wobble. One hundred metres later the road fell to pieces again, forcing me into maximum concentration and slow going. My head hurt. It was still raining. 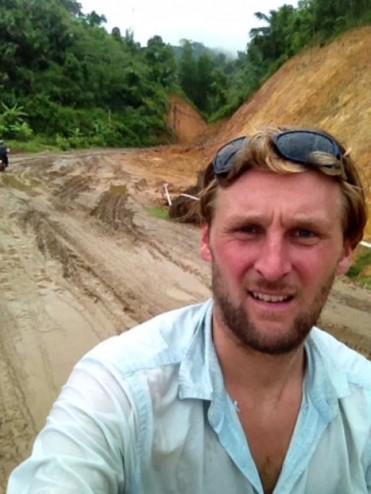 Despite this treacherous trail I arrived in Viet Quang in good time. So good in fact that I was in front of Donna and the flying machine. We messaged on text and agree that I should wait and spend the night before setting out for Ha Giang together early the next day. The road to Ha Giang was actually surprisingly flat and well surfaced, again I arrived there well ahead of the moto, having left a couple of hours earlier to allow for a decent head start. I sat at the main square and waited. I watched a busy group of labourers prepare for Independence Day celebrations. 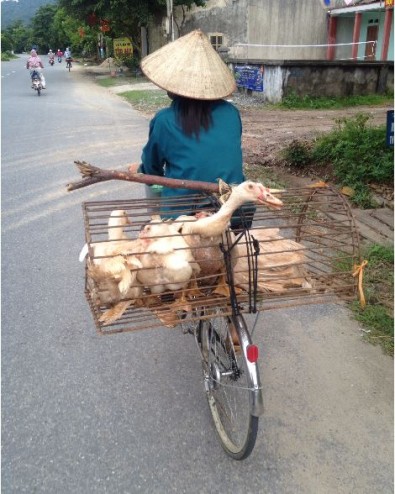 When Donna finally arrived in town we met at a hotel of her choosing and began the usual negotiation for the room. Hi cham (just shy of $10) is the standard tariff regardless of the quality of the room or facilities. I always haggle for the room, it’s what you do, starting at an optimistic ‘mot cham’ ($5 dollars) usually settling at 150,000VND ($7.50) or frustratingly back where we started at ‘hi cham’. On this occasion there was an added aspect to the deal – the owner wanted a lift to the shop on Donna’s moto. In return for the favour, we would get 50,000VND off the room. Five minutes she promised. Off they went. I took a seat and enjoyed a few chunks of Dragon Fruit and a custard apple.

Thirty five minutes later the unhappy couple return. Donna was livid. Steam can be seen blowing furiously from both ears. The lady seemed unperturbed by Donna’s rage. The ‘pop to the shop’ had turned in to farce, the weekly shop. Heated words were exchanged. The young guy on reception says that there would be no discount. We were incredulous at the cheek. Donna insisted we leave. My initial amusement passed. I insisted that the 50,000VND is paid as a fee for the ride. Donna had already left. I stood my ground. Reluctantly, but with a sly knowing smile, the lady handed over the cash. We checked in across the road for ‘hi cham’ no questions asked.

Buy me a brew

It can be tough out here on the road. Thank you to all those of you that have kindly donated a few pounds to help keep me and this blog going.